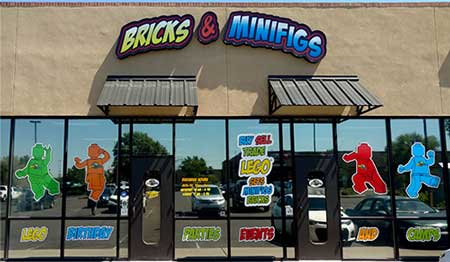 LEGOS! There’s a shop in Albuquerque that sells only LEGOS! And they buy and trade, too!

When I discovered Bricks & MiniFigs on San Mateo at Osuna, my whole family was there the next day. My son fell in love with the place, and asked if he could have his birthday party there. And he can!  Just past the Build-Your-Own-MiniFig station there’s a space where they host birthday parties.

The day we went, there were a couple of other families there with their smaller kids, making MiniFigs, there were some bigger kids searching through the bins of loose LEGO bricks that are for sale, and some teenagers hanging out, chatting.  Everyone was having a good time.

What is a MiniFig, you might ask? It’s a figurine that usually comes with a big LEGO set, or in a sealed Mystery Package, where you have no idea what you’re getting. That’s not a problem at Bricks & MiniFigs

My husband has his eye on the Star Wars LEGO sets, specifically the Millennium Falcon. I know for certain we will be returning to Bricks and Mini Figs long before my son’s birthday.

There is a whole section of LEGO Friends and Princess sets that appeal to girls, and even some of the architectural sets for us big kids.

To learn more about selling or trading LEGOs, or to make a birthday party reservation, call Bricks and MiniFigs at 505-369-1574, or stop by at 6001 San Mateo Blvd. NE, Suite E3 (at Osuna, in the same shopping center as I Love Sushi). Follow them on Facebook: https://www.facebook.com/BricksMinifigsAbq/

One thought on “Bricks and MiniFigs is So Fun!”